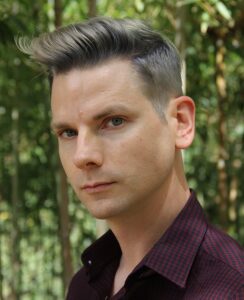 Caleb Roehrig is a former actor and television producer who cannot seem to live in one place. Currently dividing his time between Chicago and Helsinki, he is an expert at writing on planes and recovering from jet lag. His young adult titles include the acclaimed thrillers Last Seen Leaving, Death Prefers Blondes, and The Fell of Dark, as well as The Poison Pen—a tie-in to the CW’s popular Riverdale television series—and the Archie Horror original novel A Werewolf in Riverdale. His short stories have appeared in anthologies such as His Hideous Heart, Out Now, and Serendipity. Wherever he’s living at the moment, he’s there with his husband and an overabundance of books.