The Fell of Dark 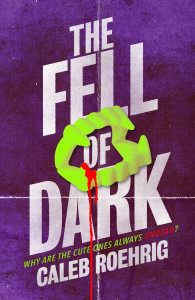 The only thing August Pfeiffer hates more than algebra is living in a vampire town.

Located at a nexus of mystical energy fields, Fulton Heights is practically an electromagnet for supernatural drama. And when a mysterious (and annoyingly hot) vampire boy arrives with a cryptic warning, Auggie suddenly finds himself at the center of it.

An ancient and terrible power is returning to the earthly realm, and somehow Auggie seems to be the only one who can stop it.

★ “Fulton Heights, Illinois. It’s just a little too far from Chicago to be fun, and a little too close to a nexus of magical energy to be boring―making it a known hotspot for vampires…. A little bit M. T. Anderson’s Thirsty, a little bit Buffy, this is a vampire story for a new generation of teens entering a world that they have no reason to be optimistic about.” — Booklist, starred review